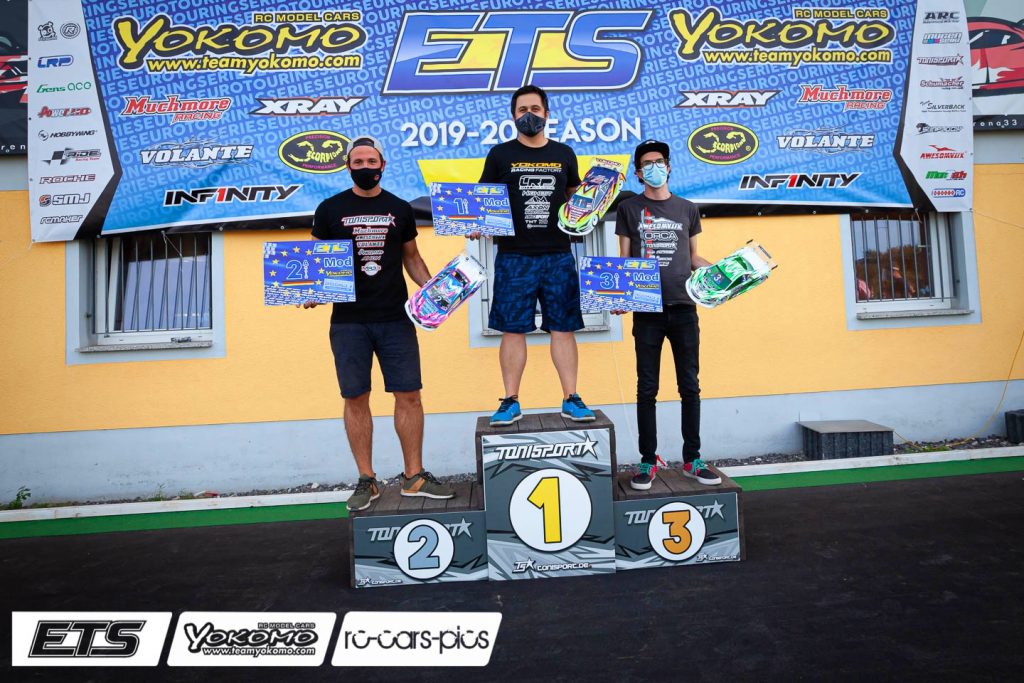 VOLKER VICTORIOUS AS ETS GETS BACK ON TRACK

This arcticle was published on 23 September 2020 on eurorcseries.com

The Euro Touring Series (ETS) finally got back underway last weekend, after the Coronavirus situation forced the delay to the 2020 season.  The newly re-surfaced and re-configured Arena 33 circuit in Andernach, Germany, was the host for the return of the famous series and attracted around 200 entries – impressive given the situation and the travel restrictions that continue to affect events in Europe.

In the Modified class, Yokomo’s Ronald Volker took the first two rounds of qualifying, putting him in a strong position early on.  The German driver led Q1 ahead of Awesomatix’s Lucas Urbain and Xray’s Bruno Coelho, whilst Q2 saw second and third places reversed as Urbain showed his intention to challenge the “big three” at this event.  Marc Rheinard took the challenge to Ronald in Q3 to get his event back on track, the Tonisport/Awesomatix driver leading Volker and Coelho in the round.  Q4 would then decide pole position between the two German rivals, but it was Urbain who took his first ever ETS round TQ to lead, leaving Rheinard in second and Alexander Hagberg having his best result in third.  This left Volker on pole, ahead of Rheinard, Urbain, Coelho and Hagberg.

A1 saw a battle between Volker and Rheinard, as the top two starters pulled a small gap out and left Urbain and Coelho to fight for third.  Rheinard kept the pressure on Volker, but as the race entered the final third, Rheinard started to drop back a little and gave Volker a small gap which allowed him to focus on controlling the pace until the end of the run.  The top four finished in grid order, with Yannic Prumper (Awesomatix) coming from ninth on the grid to take fifth.  A2 once again saw Rheinard applying pressure to the pole-position started, but this time Urbain stuck with the German drivers and looked like he could challenge Rheinard.  However, one minute into the race, the Frenchman’s challenge came to an end, rolling his car and dropping back through the field.  From this point, it was a similar story to A1, with Rheinard keeping the pressure on Volker, but ultimately not quite being close enough to challenge for the win.  Behind, Urbain’s mistake promoted Coelho and Hagberg into third and fourth respectively, the two Xray drivers finishing up around one and a half seconds behind the leading pair, with Schumacher’s Michal Orlowski making up a place to finish fifth.  The win here gave Volker the overall victory at the event, backing up his victory from the previous ETS in Daun and solidifying his lead in the championship.

A3 would then decide the rest of the podium and again, the cars circulated in grid order with everyone being so evenly matched on pace at the front there were little opportunities for passes.  Rheinard ran out the winner, securing second overall, ahead of Urbain who would complete the overall podium.

In the Pro Stock class, it was tight at the top as always with four different drivers taking each round of qualifying.  Frederik Mikkelsen took Q1, ahead of fellow Danish driver Kevin Nielsen, before Q2 saw Simon Lauter then take control, beating out Alexandre Duchet for the best time.  Q3 went the way of Max Machler, with Lauter in second place, whilst Q4 had Duchet with the win and Nielsen in second.  Adding up the points and looking through the tie breaks, Duchet secured pole position, lining up ahead of Lauter, Mikkelsen, Machler and Nielsen.

In the finals, Duchet led the way and took the wins in both A1 and A2 to secure an early overall win.  Lauter had a battle with team-mate Machler in Leg 1, but ultimately held on for second place, before staying closer to Duchet in Leg 2, but still not close enough to deny the French driver the win.  Lauter took the win in Leg 3 to confirm second overall, with Machler rounding out the overall podium.

In the Formula class, the battle at the front was between Infinity’s Jitse Miedema, who set the pace in the first and fourth rounds of qualifying, and Jacques Libar, using his own Libar Engineering prototype car, who went fastest in Q2 and Q3.  Coming down to the tie break, Libar would start on pole position thanks to setting a faster time.  Andreas Stiebler was the only other driver who looked close to the leading pair and would start third on the grid with his Serpent.

The first final saw Libar struggling to get off the line after starting on the dirty side of the grid, immediately dropping him to the back and allowing Miedema to a comfortable lead.  Behind, Dominik Reile came through to take second ahead of Stiebler.  In A2, Libar had a much better start and led the field.  On the third lap, Miedema hit a curb awkwardly and took himself out of the race.  This meant Stiebler was promoted into second, which he would hold until the end, and David Ehrbar, who had a qualifying to forget, moved into third by the end.  The final leg showdown saw Libar lead again, but an excellent pass from Miedema on the long sweeper saw the Dutch driver take the lead.  Libar continued to run close in second, but wasn’t able to get close enough to challenge to take the lead back.  This allowed Miedema to take the win and his second overall ETS vicory, with Libar taking the runner up spot and Stiebler completing the podium.

The Masters class saw domination once again from Alexander Stocker.  The German driver took three of the qualifying rounds to secure pole position, and then led the first two A Finals to take a comfortable victory.  Behind, Christian Driessle lined up second on the grid, but Caspar Morgen came through from fourth to take second overall, with Nathan Parker completing the podium after starting fifth.

Front Wheel Drive was the biggest class of the weekend, with 50 entries.  Stefan Schulz led the way in qualifying, starting on pole ahead of Kevin Sparbier and Jonas Volker.  In the finals, Schulz took the win in Leg 1, before Sparbier came back to take Leg 2.  The final leg showdown then went the way of Schulz to allow him to take the overall win, with Sparbier and Volker completing the podium.

Finally, in the 17.5 Stock class, Thomas Bemmerl secured pole position ahead of Alexander Muller and Joachim Altenhof.  In the finals, despite Muller’s best efforts, Bemmerl took A1 and A2 for the overall win.  Muller had to settle for second place, with Daniel Pohlmann taking third place as Altenhof dropped to fourth.

With the series now looking to extend into early 2021, the next event is due to take place indoors in October in Muelheim Kaerlich, Germany.
Full Results available at: https://www.myrcm.ch/myrcm/main?pLa=en&dFi=andernach&dId[E]=52034&hId[1]=search#

Vorheriger Beitrag NEUMANN DOES THE DOUBLE AT EOS ROUND 2